The ancient Casale was built in the mid of the nineteenth century on the hills of Castelli Romani by a noble family from Marino.

The Casale was originally composed by a big seasonal abode on the first floor. On the ground floor there was a wide cellar and rooms for the working of Marino wine (a famous local wine cultivated in the surrounding hills).

At the end of the twentieth century, in the seventies, the Casale was abandoned and deprived of its characteristic architectonic elements: a nobiliary armorial, fountains, fireplaces and portals, all of them realised in local peperino. The Casale was reduced to some ruins. What a pity for an edifice which is one of the nearest to Rome and which witnesses the culture and the history of a prestigious area such as that one of Castelli Romani.

In 2005 we bought out the ancient Casale and since then we committed ourselves to restoring the original splendour of the edifice through a scrupulous consolidation and repairs with original materials. We decided to invest in this project because we are certain that the wonderful edifice, with its 9.000 mq park on the hills which surround Rome, is the ideal place for a relaxing, charming stay. So far, the comments of our guests make us proud of our job and push us to upgrade our clients' stay.

The Casale ”Pietra di Ponente”  immersed in the green and quiet of the countryside, is about 10 minutes from the Ciampino Airport and about 5 minutes from the train station of Ciampino in just 15 minutes you can reach the center of Rome. We offer to our customers without a vehicle a Free Shuttle Service that allows you to stay  without having the problem of renting or traveling by car.
By car you can reach us both through Via Anagnina and Via dei Laghi.
The Casale is near a pre-Roman way on the nearby hills of Castelli Romani, between Ciampino, Marino and Grottaferrata. A park of 9.000 mq encircles the Casale. In the park you will find wide spaces with covered and uncovered terraces from which you can enjoy splendid views of Rome and the surrounding hills. ”Pietra di Ponente” is not far from Castelli Romani, Castel Gandolfo Lakes, Nemi and Tuscolo archeological park.

from 1st Nov. to 22th December
from 1st January to 31st March

Spacious double room on the first floor (one level) with shower, hairdryer, air-conditioning, TV sat, telephone, free cable and wireless Internet, safe-deposit box, mini-bar. Characteristic of the room is the stone wall with wooden raftered ceiling. Furniture with Arte Povera of the late nineteenth century. View on the surrounding hills

There’s no description able to render the fascinating ambience of the suite and the charming view on Rome. Spacious rooms on two levels. Living room and double room with bathroom on the first level. Two single beds on the second level. Provided with shower, hairdryer, air-conditioning, TV sat, telephone, free cable and wireless Internet, safe-deposit box, mini-bar. Intermediate floor with wooden raftered ceiling. Furniture with Arte Povera of the late nineteenth century. Views on Rome from every room.

For bookings made 30 days in advance, 10% discount (valid all year) non-refundable.

Book the grand suite with dinner for 2 people Tasting Menu at our Restaurant € 130.00 per night

Book the Gran Suite with a local cooking course for 2 people with our Chef € 180.00

Book the Gr Suite combined with a cooking course of the territory + Course and Wine Tasting pairing for 2 people € 240.00

Week end + Cooking Class to combine with any type of room

Book an Italian Cooking Course on the weekend - 4 hours a day - A tasty weekend of true Italian cuisine in a beautiful location at 15min of center of Rome !

The offers are not cumulative and are valid as long as the rooms are available.
We ask you to specify the offer you are interested in during the reservation.

Our park with gazebos, terraces and wonderful landscapes is the ideal ambience to spend unforgettable moments: weddings, anniversaries, parties, exhibitions, presentations of books or regional products. We will be responsible for the complete organization of the event. Contact us for further information, we’ll be glad to meet your requirements and personalize your events    -   eventi@pietradiponente.com

The ancient Casale Pietra di Ponente has an ideal meeting room for business meetings, local products and events presentations and exhibitions, for a total capacity of about 40 persons. it is an independent space, situated in our park, with a surface of 70 square meter (m 12x6). The set-up can be personalized acording to the event; the following tools are at your disposal: a projector, a blackboard, wifi and telephone.
Furthermore, it is possibile to organize coffee breaks, light lunches, lunches or dinners (to be served outside in our panoramic terrace or in the gazebo near the meeting room in spring and summer, during good weather).
A big parking area is available for customers.

Here is the meeting room's rate:

(the tools at disposal are included in the rate)

For any further request, a special rate could be arranged.
The rate of coffee breaks, lunches and dinners will be proposed according to your needs.

The hotel rooms are at customers' disposal, if needed, and we reserve them a special discount of 10% on our website prices.

The restaurant is open all the year long. Our menu proposes local traditional dishes made with fresh products, cooked at the moment in order to guarantee quality and genuineness. The dishes vary depending on the availability of the different seasons. The restaurant is set in a characteristic hall with barrel vault and an ancient fireplace in peperino which enriches the room with a welcoming atmosphere. A little hall on the second floor is available for a tete-a-tete dinner. In spring and summer you can have your meals outside, in the terrace or in the elegant gazebos made of wood, where you can appreciate the west gentle breeze which always blows on our hills. From every corner of the garden you can have a lovely view of Rome and unforgettable sunsets. click to enlarge

The wine list presents mainly 'Marino' and 'Frascati' of biological production to keep faith to the history of our casale, which has been provided with a wide cellar for wine production deriving from vineyards of the surrounding hills since 1850. At that time the wine preservation took place in the charming cave with lateral niches in which barrels of wood were set on hand-sculpted peperino bases. The cave is still in existence and the air intakes have been restored and have become a distinctive architectonic symbol of our abode. 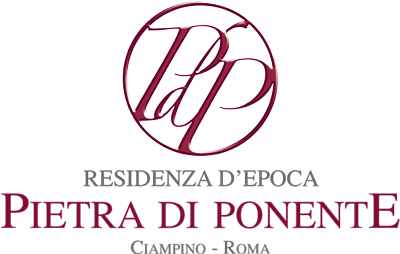